Did You Cry at Last 10 Minutes Furious 7 Ending?

I’ve been a fan of The Fast & The Furious since the first movie released in 2001 until the latest instalment of Furious 7 which is currently showing at the cinema.

Furious 7 is packed with adrenaline rushing action scenes, from hand-to-hand combats, bomb blast here & there and even more devastating explosion (especially bass drops moment!) in the film. In the new film, a new character is introduced, Deckard Shaw, a villain played by Jason Statham, the big bad brother to Owen Shaw.

Hobbs & Deckard Shaw fights at the beginning of the film and later got blown out of the building, landed on a vehicle while trying to save Elena.

Given a mission by Frank Petter played by Kurt Russell to rescue Ramsey (Nathalie Emmanuel), the crews are united for “one last job”. They then fly to Abu Dhabi searching for high tech tracking system called God’s Eye. There is your chance see the Lykan Hypersport, a sports car that has been circulated in other websites & social media a few days back after Furious 7 premiered.

Paul Walker was the only actor I always to see in the film, every single scene of Paul reminds me from the very first F&F movie he acted, how good looking and young he is during that time. It’s like I’m growing up watching him in all Fast & Furious movie. I know you do too.

Also like the funny moments in Furious 7, when Paul look serious in a scene ready to race but actually drive a minivan.

The last 10 minutes Furious 7 ending is a tribute to Paul, it was heartfelt, felt sad during dialogue where the crews speak to each other and watching Brian & Mia playing with their son at the beach. And that is when the Furious 7 ending song kicks in. To see the similar scene from the first film where Toretto drive his black muscle car & Brian in Supra stopped side-by-side and both later say farewell by driving their own directions, Brian to the left & Dom to the right, eyes almost shed tears a little bit and tried to control my emotion. The ending really touching that I’ve never felt it for a long time, don’t actually remembered which other movies made me felt that way. I guess my friends felt the same way I do. 🙂 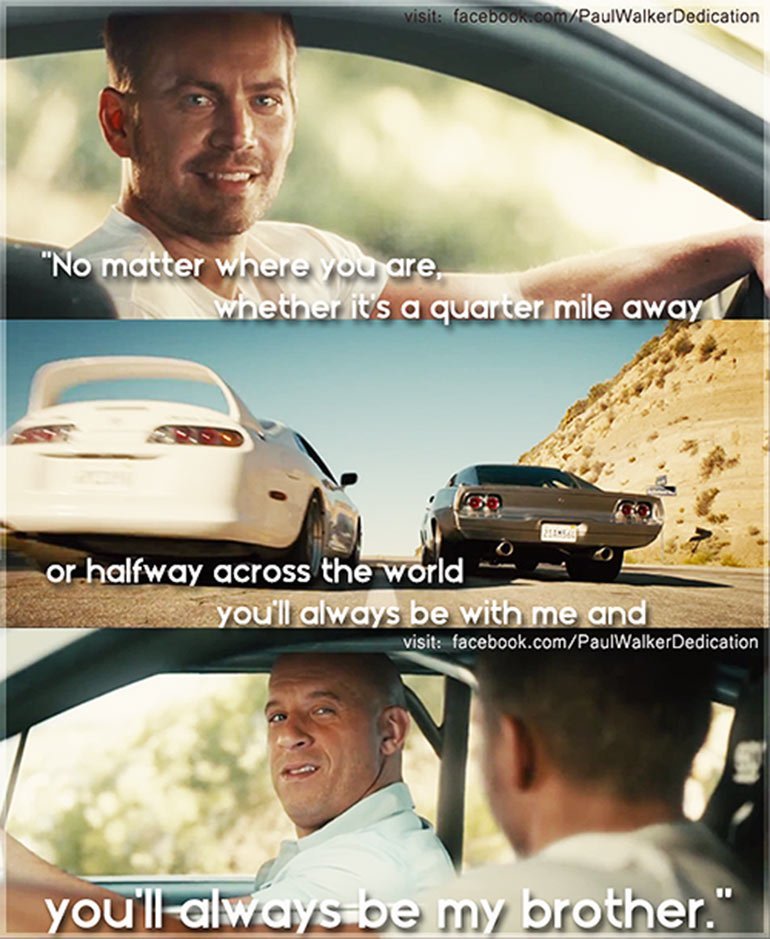