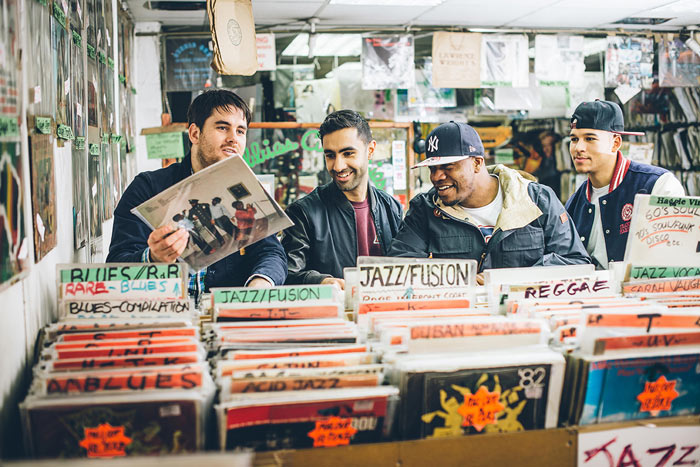 1. How did Rudimental begin?
We have all worked in and around studios making music in Hackney from our early teens. We actually came together as a foursome two years ago when Amir joined the band – Kesi, Leon and I had been making music and pirate radio shows together before then. When we came together one of the first tracks we made was ‘Spoons’, after that we made ‘Feel The Love’ and since then we’ve been writing and recording our debut album.

2. What made you want to come together as a group rather than work individually?
I think it was more of a natural thing, just bumping into each other really. Kesi and I have been making music together for about three or four years now as Rudimental. Leon was DJ-ing by himself, and eventually we ended up DJ-ing together and were all drawn together with music. We all kind of grew up together as well, but we met Amir in a studio in Hoxton. We worked on a few tracks with him and we found that we worked really well together and Amir just kind of slotted in like a charm. He provides things that we’re not capable of and we all provide things that we’re good at and it just formed into a really good dynamic of four producers striving off one another. It’s four producers with a different musical background, but, coming from London and having that local electronic music influence, it just seemed so right. We’re all musicians as well, and all into music, not just beats, so it all just kind of clicked.

3. Where did the name Rudimental come from?
Kesi thought of the name. Back in the day when he used to have piano lessons as a kid he always used to forget his book of Rudiments which is a book that teaches music theory and rhythm. Rudiments stuck in his head as he was always told off for forgetting the book. Kinda thought Rudiments was a cool name but didn’t work for a group of people (4 of us). So Rudimental seemed to work better!

4. How do you see yourselves?
We’re like Dr Dre, James Brown and Dizzee Rascal in a cheeseburger… without the lettuce. DJ Locksmith doesn’t like lettuce. We’re a little bit mental, hence the name Rudimental.

5. Each of you brings your own tastes with you; Do you think this is the main reason why you have such a wide-range of styles in your music?
Yeah, and I think that, even though we’re essentially four producers, we all contribute evenly to the sound of the song rather than all of us just wanting to be the guy who makes the beat. We all like to dabble in bits of everything; from writing the lyrics to coming up with the melody. If one of us writes something that sounds good at 160 bpm, we’re not gonna put a house beat over it and because we’re all so eclectic in our tastes. We listen to soul and other old school music like blues. We know that we can incorporate a much more fitting style and we’re not restrained by a narrow musical knowledge. When I was growing up, I was listening to Dizzee Rascal whilst playing blues songs and learning to play piano, so I had very random taste. I used to hide my iPod from my mates. But we all have this eclectic taste and, as far as I’m concerned, if you’re a producer, you need to have a wide knowledge of music to benefit yourself and the music. When it comes down to the album, I think that people will be quite surprised because it’s not very genre specific; we’re gonna float between genres throughout it.