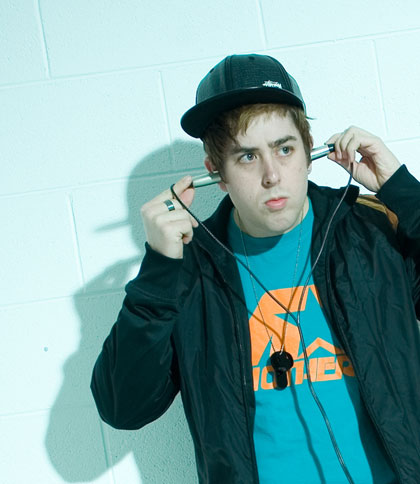 1.How long have you been involved in DJing?
Well I have actually been doing production and DJn since high school but over the last 4 years its become quite full on for me.. nonstop actually!

2.How would you describe the mix you play?
Well when i started playing like 8 years ago i was playing hardcore n things like that, alot of DJs in Australia started out at raves in the 90s.. haha then i focused on breaks (which was MASSIVE in australia).. I still have my breaks and hardcore records but unfortunately they collect dust now. At the moment youd probably say i play techy through to bassliney house stuff… i produce like that stuff atm too but sounds are allways changing.. its all house music! My last remix of F is for like an inbetween of both my fav styles atm. Often here in Australia and abroad too you have to alter your “own style” abit to suit the crowd you are playing.. i have no problem doing this.. along as i still feel what im playing so sometime i play bit more main room house or mashup sound if needed. Definitely you would say I play house music.. I dont know if you could box it all into one genre of house.. I also like to make my sets more than just playing a record, then playing another and another and another.. haha its important to make it something special and I always play majority of my own and friends productions in sets to make it special and exclusive too!

3.What do you think about your sets at Euphoria, Ministry Of Sound recently?
Well i was not sure what to expect, Id never seen the club before but i was blown away with the level of production and stuff put into the club.. it was great! My set was cool.. i didnt know exactly where I would take it musically.. whether it was to be something more commercial or something more cooler.. I did sort of did in between. I started out with some bassline stuff n took it around the place.. few floorfillers here n there, overall it was pretty cool i think.. i could have gone more either way but was probably a good line to tread.. the set is up on my facebook and myspace ; ) I was using Serato on a macbook with 1200s on an 800 mixer with 2 1000mk3s for sampling and effects, thats usually how i play nowdays.. also travel with a sampler n live gear too but its much more setup and luggage.

4. In future will you play there once again?
I def hope to play there again sometime soon.. i really enjoys the crowd and everyone that worked there! Thanks tuborg and e-iideas for getting me there, and thank you to ian and the euphoria possee for the good times!

5. How did you see the crowds reaction during your sets at Euphoria?
Yeah the crowd seemed to react quite well.. some songs got alot more reaction than others.. specially when they seemed to know them – i played alot of mine, and friends remixes of “known” tracks and they really seemed to dig them.. was funny because theres some songs that are MASSIVE over here that didnt get as much reaction there.. still good but! Coolest thing was i played my fidgety bassline remix of Show Me Love (robyn s & mobin master) and crowd went nutso.. in Australia this just got redone (its an older song) and i just did a remix for Sony here.. i didnt except everyone to know it, mad reaction.. (def the first time anyone would have heard that mix but, just got it back from mastering that week)

6. Which DJ that inspired you most?
Mmmmmmmmmmm… LimboiFresh!, hey mate!!…. Well Im not sure if DJs really inspire me nowdays, back when i was younger i really looked up to the big rave DJs here.. but now i play alongside them and really its nothing special, just when you are younger it seems soo much more. Unless someone is doing something really special or different it doesnt inspire me.. Im inspired nowdays more by producers more and artists i suppose, so when someone is playing there own music or doing it live, I think that give great inspiration to me!

7. Which country do you prefer to play and why?
Playing over in Malaysia was great.. and i hope to come over and play again soon *winkwink*, but i love playing in Australia alot.. I do interstate gigs here every other week and get to see the whole country from top to bottom.. at the end of this year I think ill be doing alot more South East Asian shows and ill get back to you on this one ; )

“Thanks for the questions guys! Check out my myspace for info on what i been doing and to peep my new remixes and production.. everything can be found on Beatport. Lots of remixes and new originals coming all the time, hope to get my label pumping over there soon too ; ) Have 2 new acts coming up and yeah.. stay tuned MY!!”