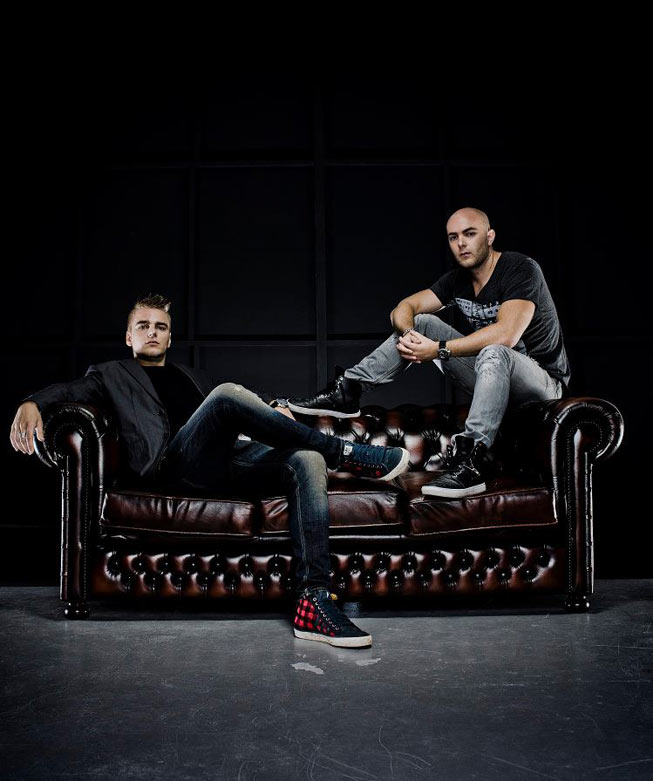 Dutch duo Showtek initially known as the pioneer in hardstyle music around the world. The two brothers, Sjoerd and Wouter Janssen has collaborations projects with the biggest names on earth such as Tiesto, Marcel Woods, Allure and many more. Check out the interview below to find out more about their latest updates and opinion.

1. How did you both get into music?
Basically is started all out of hobby, just like football players do. You have a talent, you play around with it and suddenly there is that moment where you can see you can do more with it than playing around. Walt (the older brother) played piano since he was young, had lessons but never wanted to play from a book. He always said he wanted to create the songs him self. Sjoerd always played on his computer with music programs to make dj mixes and to remix tracks. So when the both of us got together for a musical sessions we noticed we really worked along together, we were a team. From that moment we just started to make dance music. And we are still going strong.

2. What is your current favorite track?
We have a few, even older ones we still love to play. On the moment our new song; Showtek & Justing Prime – CannonBall is doing great on the moment. Recently the collaboration with Hardwell – How we Do got nominated for best videoclip on MTV USA. So we still play a lot of our own music, but that latest Chuckie – Make some noise , is a track we play in every set!!

3. Tell us more about your upcoming releases;
Yeah we are so excited. We have two really big bombs coming up, both part of our Crazy Collab collection (Crazy Collabs stands for a collaboration between us and other artists to cross musical boarders, experiment and to have fun with who ever), the first one will be ; Showtek & NoiseControllers – Get Loose , which also includes a Tiesto Remix and which will be released on OWSLA (also knows as Skrillex’s Label). The next one and probably also released in December will be Showtek & Bassjackers – Hey!, which is real dance-floor killer. This song will be released on SPINNING RECORDS. The song with Noisecontollers is mind-blowing and already been played by several big dh’s, this song is gonna kill every speaker!! The one with Bassjackers is a bit more mainstream but very powerfull and it was great to work with these guys as well in the studio!

4. Where is the best club on earth you’ve ever played at?
Wow, hard to mention just one name. Well we just got back from our Asia trip, one of the clubs we played at was Club Octagon, located in Gangnam Seoul; South Korea. This club is just insane, you can’t even imagine!! A very fancy (bottle) club with crazy people, including a lot of beautiful girls and people pop bottles of champagne like it is water. A sound-system where even deaf people can hear and a huge LED screen behind the booth that can open up for singers or dancing girls. And the VIP Area is so pimp, you never want to leave the club when you finish, you just wane hang out there, have fun and eat lobster and steaks cause that’s what they serve. There is restaurant with an open kitchen serving top notch food! So yeah, definitely one of the best clubs in the world.

5. What do you think of the nightlife scene in Asian Countries?
Well, it’s growing and growing. Japan just went down like crazy after the earthquake. They shutdown clubs to save electricity and stuff, but for the rest it is gonna be a booming place for the next several years. Maybe not as big as in America but definitely a important area to keep an eye on. It is really cool to play in Asian countries, they have the best culture in live (in our opinion) and the people go totally out of their mind during a party, so we never mind going there even if the flights are long!

Looking forward to 2013, what have you got in store for your fans?
6. We are working on our new own record label and we are hoping for an album in 2013, but with our busy schedule which is based on international shows, the traveling doesn’t make it easier. So a lot of goals to reach but we will definitely continue our new dope sound.

Finally do you have any announcements not mentioned or shout outs?
7. Well a funny fact; do you fans know what we really love after a show, instead of alcohol and girls (what everybody thinks of a dj life). We love to kickdown for a second and drink mint tea, like old b*tches haha.. something you probably didn’t know. For the rest, thanks for your support and for more info go to; facebook.com/showtekofficial

Showtek will be performing for their upcoming show at Zouk Club Singapore on 19th January 2013.