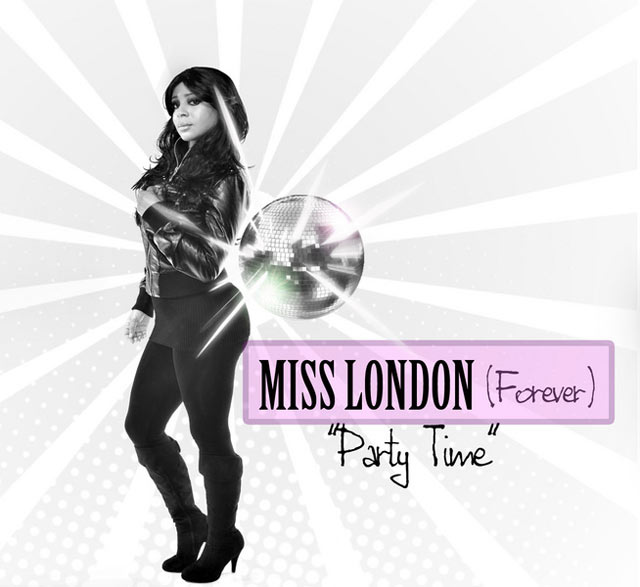 Determined and bringing the party to your door , Miss London Forever The daughter of a Internationally famous DJ, was born in West London Ladbroke Grove, into a family where the music culture reigned supreme which afforded her the opportunity to experience a wide variety of genres, from pop to reggae to hip-hop.

U.K. POP SENSATION MISS LONDON FOREVER IS MAKING THE DJ’S BRING THE BEAT BACK WITH HER NEW SINGLE – “PARTY TIME”

Miss London Forever has been writing hot songs and sparking fires for as long as she can remember. This vibrant entertainer started writing at age 15. Miss London Forever Cites her influences from Cyndi Lauper, Tina Marie, Missy Elliot , Kylie Monougue to Madonna, her style is fun and deliciously wicked, blending the sassy swagger of rap and the vivacious glamour of a pop diva. After moving to Atlanta to pursue her dreams , Miss London Forever dove into the club scene and teamed up with premier Legion of Doom members DJ Skeeta and DJ Chap. She is now proud to be the First Lady of TrunkBeata Entertainment.

Fresh off the release of her NEW single “PARTY TIME” , this dynamic artist is ready to stomp through the music industry with strong lyrical talent and classy sex appeal. Miss London’s music speaks for itself . Working her way up to be a powerful force on the music scene with strong dance tracks. She has earned local airplay, a coveted feature in The Street Report and is a staple on the Atlanta live music circuit, performing for crowds 3,000 strong. Ever ambitious, Miss London Forever has been placed on several major DJ hosted mixtapes.

Undeniably club worthy beats collide with glitter and drum kits to create a party starting sound that pushes the boundaries of genre definition and has developed a strong local fanbase. She is also working hard on a full-length album slated for release in 2011. In addition to lighting up stages across Atlanta, Miss London Forever looks forward to tours throughout the US, UK and abroad and developing licensing platforms for film, television and major media outlets. She says, “I hope to make the whole world have fun with my music and always represent the UK”!

Here’s what They are saying about MISS LONDON FOREVER!

DJ Bingy – Worldwide
“yeah the track is dope! I played Miss London in LA, a club call ROXY and people was loving it! dope, dope! a couple of A listers came thru and they was bopping it”

DJ Ball CEO Get It Poppin Entertainment
” Yo It’s DA Truth! Keep Me up on the Latest!”