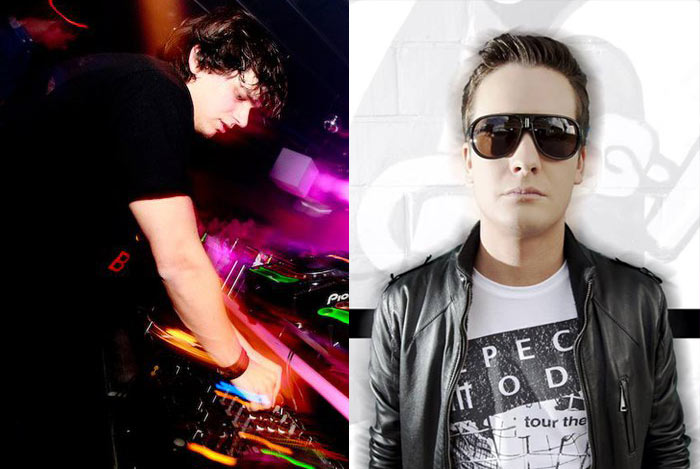 We spoke to the production duo about working together in the studio and what’s up next for the boys from Belgium. 2013 has already seen some big steps towards success for Sixty69nine who has already let off a release on Housepital Records and an EDM rework of Rihanna’s ‘Diamonds’ alongside Ignazzio. With news of a big summer release imminent, we pulled a chair up with the boys to get the low down.

Hi guys, how are you both today and what are you currently doing?
SIXTY69NINE: I’m very busy. I recently released a new single called ‘Scream’ (together with Belgian musician and singer Damian Miller) on Housepital Records. I’m also constantly working on new ideas and projects in the studio together with Ignazzio. We really have some exciting new stuff lined up. Of course I’m also dj’ing a lot, I have my own radio show coming up called Home Sweet House Radio and I also work for MNM (Belgian national radio station)

IGNAZZIO: We’re currently very busy in the studio working on new ideas and projects. I still create my own projects besides all the tracks I did with Sixty69nine, but for the moment they are not my main goal. It’s more important now to get good releases and attention to the latest productions we did together. I’m also DJ’ing a lot, playing every weekend all over the Flemish part of Belgium.

Let’s talk about the new ‘Diamonds’ rework. What made you go for that particular track?
SIXTY69NINE: Diamonds is written by one of my favourite artists: Sia. And of course the vocals by Rihanna are just absolutely amazing. When Nick called me to do a remix of the track together, I didn’t have to think twice. When we were creating the melody lines on top of the vocals, it gave me goosebumps. And as a certain Swedish inspiration of mine always says: ‘Goosebumps never lie.’ I’m very pleased with the result and I just love playing it out during gigs. The crowd reaction is great!

IGNAZZIO: As soon as I heard the original track, I wanted to make our own version of it. We both love Rihanna’s voice, so Wouter agreed instantly when I called him. I knew I needed Wouter for this one, because otherwise I would have turned it into a jackin House bootleg. And that’s not the way I wanted to go with Rihanna’s voice. I’m very happy with the result.

How did you approach the remix? It sounds like it’s just the vocals?
SIXTY69NINE: Yes, we only used the vocal. The rest we made from scratch.
IGNAZZIO: The original track is below 100BPM, so there’s not much you can do with the original samples.

Do you think it’s important for bootlegs to be very different from the originals?
SIXTY69NINE: Not always, but in this case it was really necessary. I wanted the track to fit into my sets, so we made this remix with the people on the dance floor in mind. The best thing is I also enjoy listening to it when I’m not playing it. And I hope many people will agree.

IGNAZZIO: Sometimes yes, sometimes no. As I said, Diamonds is a slow track so we had to make something totally different. But 2 years ago I made a bootleg of Gotye’s Somebody That I Used To Know, and just because I stayed so close to the original track, it became one of the most downloaded and played bootlegs of that record. My Soundcloud page exploded! Some track just don’t need a complete make-over. But Diamonds obviously needed it.

What are your personal favourite remixes of all time?
SIXTY69NINE: There are many great remixes, but if I have to pick one that is really special to me it would be: The Temper Trap – Sweet Disposition (Axwell & Dirty South Remix). A masterpiece! I heard them playing this track when they were doing a surprise back to back dj-set at Tomorrowland back in 2009. This track and this moment have inspired me ever since!

IGNAZZIO: All Dada Life remixes. For one simple reason: Their amazing vocal work. If you let them do a remix of your track, you’ll see your vocal chopped up into little pieces which create a surprising new feel to the track, but with a nice wink to the original. They perfectly know where to place each piece so it works very well with their melodies and beats.

How do you work together when working on music?
SIXTY69NINE: I absolutely love euphoric, emotional melodies so most of the time I’m just playing around with some ideas until I find something we can work on. But actually Nick and I are constantly shooting ideas at eachother. It’s a very natural way of working and we don’t need a lot of words or explanation to know which direction we want the track to go in.

IGNAZZIO: Sixty69nine is better with melodies and bass lines. We always start from that point, so I can build the beats and percussion around the melody. I used to do it the other way around, but that only works when I’m producing some Deep House for myself.

Sixty69Nine, what’s the best thing about working with Ignazzio?
SIXTY69NINE: We complete each other very well production wise. When I lack a little bit of inspiration on a certain part of a track, he comes in an gets it spot on and vice versa.

Ignazzio, what’s the best thing about working with Sixty69Nine?
IGNAZZIO: His ideas are really compatible with mine. We often think exactly the same. And for example when I say: this parts needs more ‘woesshhhh’, he’ll understand what I mean. As I said before, Sixty69nine is better with melodies and bass lines, as I am more into arranging the beats and percussion. The perfect combo in my opinion.

Sixty69Nine, what’s the worst thing about working with Ignazzio?
SIXTY69NINE: Nick likes pizzas with pineapple on it! I mean, really? Pineapple on pizza?

Ignazzio, what’s the worst thing about working with Sixty69Nine?
IGNAZZIO: I always have to bring the pizza and drinks…

What’s next from you guys?
SIXTY69NINE: We have so many ideas, so we try to split them over several tracks. You can’t just put everything in one track. We’re working on a lot of new projects. But we only release it when we’re both 100% happy with the result. At the moment, we’re looking for the perfect label to sign our latest finished production ‘Hell Yeah’ to. We made that track with UK producer Calum C. That should be our next release.

What wouldd be your personal top tips for remixing and bootleg work?
IGNAZZIO: Do not just copy other producers! You can take some ideas to get inspired, but don’t just copy. Try to create your own sound. I think we found our sound. Now we’re improving and improving it. People will recognize it sooner or later and be like: ‘’Hey, I think that’s a new track from those 2 Belgian guys!”.