For Malaysians who are in love with dance music and Future Bass, this special column is just for you! We are back this month, with an exclusive interview with Malaysian talents, FSJ & Diyana Chan.

Nocturnal had the opportunity to get intimate with the makers of Strangers Again and we had a quick chat with the talents behind the music – FSJ & Diyana Chan.

Let’s get straight to the point and find out how they got started with the collaboration and the release of this absolute Future Bass bliss.

First of all, the song is an absolute banger!! Tell us how did you guys meet?
FSJ: I’ve produced an album for a local band called Wanted Symphony. Really cool guys, they write great music – you should check them out. Daniel the lead vocalist, introduced me to Diyana while I was working on their album.

DC: Why thank you. Yeah, we met through a mutual friend of ours, Daniel from Wanted Symphony. A few of my friends have been bugging me to put out my music and I thought, why not? So, meeting FJS was a blessing in disguise.

Talk us through the creative process behind the production of Strangers Again.
FSJ: Well, for me there’s no formula for writing music. It’s always different for every new project, I might start off with a beat, could be chords or it could be just going through a bunch of samples to get me started. 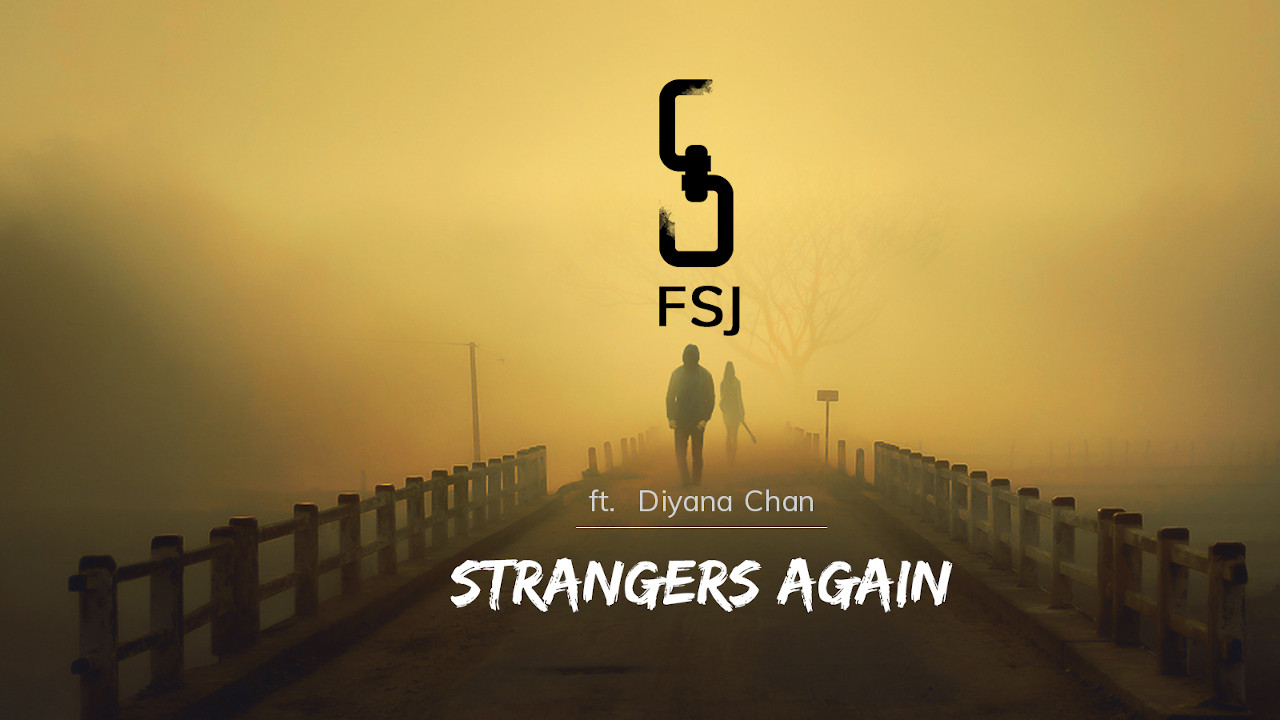 With Strangers Again, I actually started with a basic chord progression using a piano and humanizing the chords. Messed around and started building the track from there. The day before I met Diyana, Daniel (from Wanted Symphony) sent over the instrumental to her. But when we met up, she told me that she actually had already written the song that fits perfectly. I think you told me you(DC) wrote it at 6 a.m., like some hours ago before we met up?

DC: Hahaha – Yea, it was around that time

FSJ (Con’t): We were both really stoked about it, however at this point it was only lyrics. As we progressed, she eventually came over to my place to record. She has this amazing voice that instantly brought the track to life.

Funny story, the version that we released is actually not the original version. The original project file was corrupted due to a technical error when I upgraded my PC. So all I had was the clean vocals from Diyana, and I produced this “NEW” version.

DC: Well, I’ve been writing music since I was 15. I was going through a bad relationship at that time and wrote what I was feeling; you can say I’m like, Taylor Swift. And so happened that Daniel introduced me to him (FSJ). When I heard the original track of his, I could hear the melody and the lyrics I recently wrote fit perfectly with it. It’s a total coincident!

How did you both get into music?
FSJ: I’ve always loved music from a young age. There were a lot of influences growing up, I listened to a lot of alternative rock to hip hop and eventually fell in love with electronic music. I was always fascinated by the idea of how all these sounds come together to make a track. So I started out with FL Studio for a bit and switched to Ableton later on.

DC: I started playing the piano at the tender age of 3 and I’ve always inspired to be a pianist. Growing up listening to Beyoncé, Christina Aguilera, and Kelly Clarkson, I ventured into singing. I started writing my own songs when I went through my first relationship. Now, I’m hoping to get my music out there and hopefully, you will not hear the last of me.

Give us the name of one song that will never get old?
FSJ: Linkin Park – Crawling

DC: Welcome to my life by Simple Plan definitely!

Funny story, the version that we released is actually not the original version. The original project file was corrupted due to a technical error when I upgraded my PC. – FSJ

You both come from different realms of music, FSJ – you are primarily electronic music based producer and Diyana, understand that you mainly are focused on the acoustic side of music. How do you both view these kinda crossover collaborations?
FSJ: I think every music genre is unique and special in their own ways. But that’s the thing with music, there’s no one way of doing things. You never know what the end product is if you don’t try. The trend of these collaborations is becoming more and more obvious these days. This has been happening in the past few years, especially in EDM and pop. In Malaysia, these collabs do exist, but it’s a not even a fraction of what other people are doing overseas. I hope to see this happen more in the future.

DC: Music is a universal thing. You can always combine traditional music with a hip-hop flare and it still works! I totally agree with what he (FSJ) just said, you never try, you never know. It’s like how you hear Dua Lipa’s songs. It’s pop with electronic music; so it’s electropop. We’re always trying new things to share with the world and I hope we are able to inspire people with our music.

So what’s next for the both of you? Any new music or upcoming shows?
FSJ: I have a lot more new music that’s going to be released soon. But no upcoming shows for me, not this year. I’ll be focusing a lot more time in the studio and we’ll see how it goes next year. I think you (Diyana) have a few upcoming gigs right?

DC: Yes I do. You’ll probably find me at open mics in KL. I’m currently working on new materials that I hope to share with you and the world next year. A full album perhaps? We’ll wait and see!

There are not many electronic music producers here in Malaysia. As Malaysians, we should support and be proud of our local dance music talents. Both FSJ & Diyana Chan did an amazing job with their ‘first of it’s kind‘ collaboration!

Find out more about FSJ & Diyana on social media. Listen to their music and believe us, it will take you on a musical journey! Stream it now below!